This is one of those updates where there’s something for everyone:

There’s a lot to be excited for on the video front - massive performance improvements and great new modules, just to get us started!

Power to the GPU!

There are great things on the audio side also - Two new Sampler instruments, an improved A+2 synth, and a ton of new features and bug fixes. 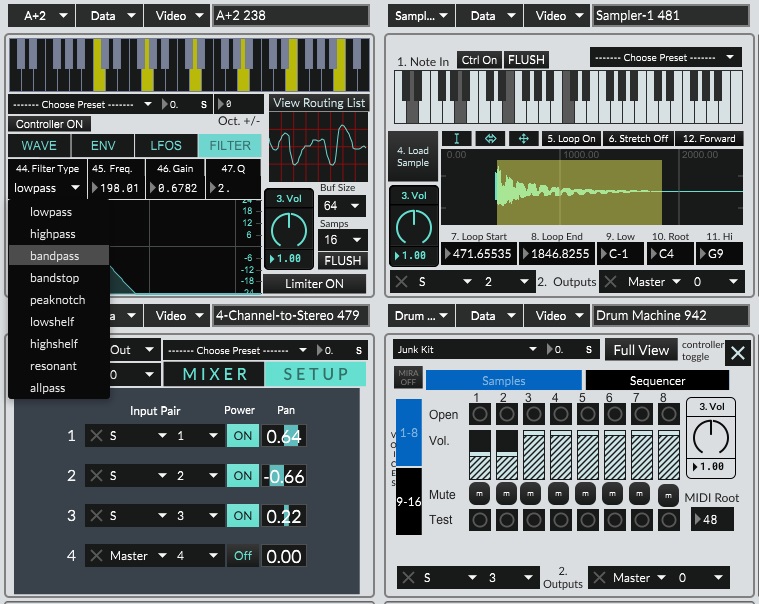 There’s also an improvement that will compel all users - better dials that provide more control and more flexibility.

This is one of those updates that is so big, we hope everyone will make the upgrade. Today’s announcement will try to cover everything, but be on the lookout for new tutorials soon that will go into more detail on many of these new features!

A major overhaul to the video code in MSDP means that almost all video content renders on the GPU now! This should provide major performance gains for all video users with dedicated graphics cards, and means higher frame rates at all resolutions. If you’ve struggled with keeping your frame rate up on your boards, this should help. If you HAVEN’T struggled with keeping your frame rates up, this should still result in better fps even with more modules! This overhaul also means that all new video content moving forward will render on GPU as well!

There is one caveat: For now, a few processes still render on the CPU. This applies to the GlitchBox and Scanner modules, and to the final steps of video recording. Hopefully this will change over time, if we can find an appropriate way to replace those processes with GPU-rendering equivalents.

“Can I set the dials so that I can control them by moving the mouse up and down?” - Is the single most common request received from MSDP users. And when one request comes up multiple times, it becomes a major priority.

The dials have been re-designed once again in response to these requests, and all dials now control by dragging the mouse up and down, instead of by circular rotation.

On top of this, holding shift while moving the mouse now allows for more precise fine-tuning of values.

You can still change values by editing the number box directly, just like you could in previous iterations of the dial.

Two system processes have been renamed for consistency:

With the new Image-to-Video module, and the new ability to load images into the Video File Player and EZ Video Player (more below), it only made sense to add the function to the Collection Manager.

MSDP no longer differentiates between targeted FPS values for performance rendering and for video file rendering. Now, in the System Preferences, users simply set their desired target FPS, and the GPU will do it’s best to reach and maintain that target.

FLAC, or Free Lossless Audio Codec, files are now supported in MSDP. This allows for extremely high-quality audio file playback and manipulation for users who have the resources to handle it.

Syphon and Spout In and Out - MSDP now has integrated support for both Syphon on MacOS, and Spout on Windows. These tools make it easy to send video out of MSDP and into your other video applications, like After Effects, Resolume, or Processing. It also means that you can bring video in from these same programs. This opens up a wealth of new possibilities for our video users.

Image-to-Video - Bring static images into your project and play them back as a video stream, making them manipulable in real-time by other video processing modules. Includes the ability to zoom, rotate, and offset your images.

ZROer - A tool from Zooming Rotating and Offsetting a video stream.

Chromakeyer - superimpose one video stream on top of another via chromakeying.

Lumakeyer - superimpose one video stream on top of another via lumakeying.

VS (VSynth) Displacement - displace the pixels of one video stream by the data of a second. Similar to the FM processes of other VSynth modules, but works with any two video streams.

Sampler-1 and Sampler-8 - A single audio file and 8-file variant Sampler Player. Provides a powerful and easy-to-use tool for mapping audio files across a MIDI keyboard for musical playback.

A+2
* includes a new filter tab with a variety of new options.
* new LFO options for filter control.

Stereo Mixers
* now include a Stereo Pan position, instead of just left / right / center options.
* have been re-factored to be more CPU efficient.
* now contain two outputs, instead of just one.

All multi-channel mixers have been re-factored to be more CPU efficient.

VST Instrument and VST Effect can now have all parameters saved and properly recalled upon reload of module.

MSDP is a project headed by Hugh Lobel, but it receives additional input from multiple contributors and thrives on feedback and help from it's active community. If you enjoy the software, visit MSDP's social media accounts and share your thoughts. MSDP has a facebook page, an instagram account, a twitter account, a subreddit, and a YouTube channel, and we love engagement on all fronts! If you really love the project, please consider becoming a donor on Patreon, where you can download custom-built presets, boards, and projects, and where you can get early-access to new modules before they make it into the next release. If you prefer to give a one-time gift, you can use the Donate button below to send us a donation of any size via PayPal.

To sign off, I’d like to say thank you to our users for your belief in our project, and for all of the contributions to the MSDP community. Your engagement gives this program purpose, and inspires us to continue working.

-Hugh Lobel, and the Music_SDP team.

The Music and Sound Design Platform is 100% free and completely open-source. MSDP utilizes the GNU General Public License v3.
The source code is hosted on Github.